Are My Vehicle's Mods Covered?

Make Sure You Read The Fine Print

Its not unusual for people to fail to report the modifications that they make to their vehicle to their insurance company.  Not reporting modifications at all is a subject that deserves a dedicated article devoted to it.  In this article, we will stick to giving advice on what to watch out for if you do the right thing, report your mods and get them insured.  You want to really be properly insured as opposed to just thinking you are.

So lets say you submitted a list of modifications to your insurance company, turned over receipts and now your list of mods is scheduled on a rider attached to your policy.  You should be in good shape to have them covered.  Sadly that may not be true.  We'll let this real-world example stand as a warning, and a guide on what to watch out for.

Before we begin, a bit of background to keep in mind:

What we've said just above can make for an unpleasant experience if a claim occurs.  Here's just one, related to us by a consumer we helped advise as the situation unfolded.

The owner of a late-model show car had a very expensive paint job.  The kind that requires you to re-paint the whole car if there is damage.  Wanting protection for it, he went to his agent.  The agent set him up with a special equipment endorsement that listed the paint job, covered it for a specific value and cost the owner money to add onto his policy.

Everything was fine until he had a claim.

Months later another motorist hit his car and fled the scene (and was quickly apprehended, eliminating any doubt as to the validity of the claim).  The consumer was thankful he had the foresight to purchase the extra coverage as the paint was going to have to be fully redone.  Unfortunately, what was expected to be a simple situation didn't turn out that way.

At about this time, the consumer came to us and asked for some advice and help dealing with the situation. 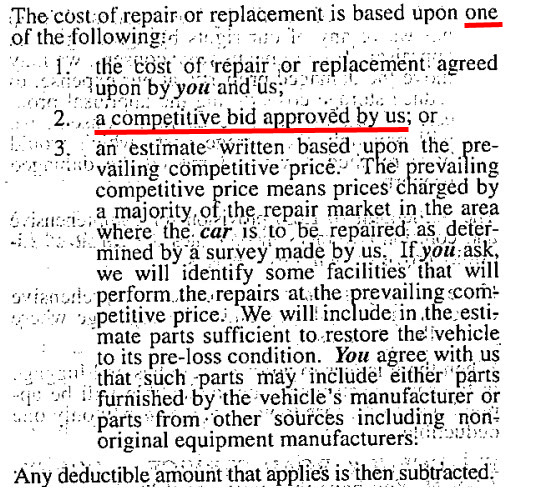 We and his attorney were able to help some, but in the end, while the carrier softened their position, they fell back onto a clause in the policy (click to enlarge) that contained a surprise with regard to how the damage would be paid.  As soon as we read this, we knew that Item #2 was the only one that mattered.  Translated into plain English it reads "We will pay what we feel like."

Which is what they did.  The consumer lost his showstopping custom paint job.  Regardless of the insured amount listed in the endorsement, the company simply refused to pay.  On the advice of his attorney he accepted the offer they gave to him (which was to put a conventional gloss black on the car... at least it was a full repaint).  This was the best he was going to get without taking them to court, and the poor guy just didn't have the resources or the will to keep fighting.

What lessons are here to be learned?

Article by
Matt Robertson
Matt is the Managing Partner at Leland-West Insurance Brokers, Inc. He started with the firm while still a college student, way back in 1984. According to Matt his only remaining hobby is Motorsport ... because its all he can afford ("will work for tires"). Reach him at matt@lelandwest.com
Toll Free
1.877.237.4730