Who Invented the First Car? History of Inventors & Controversy 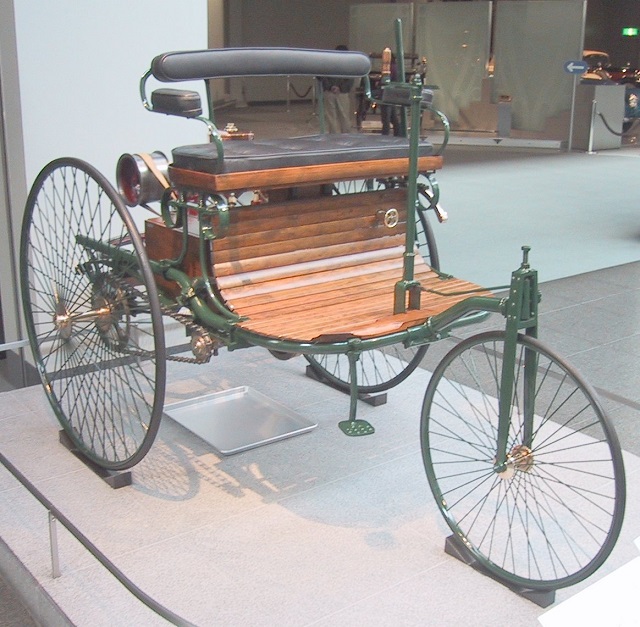 Who was the inventor of the first car? If you were to ask most people this question, the answer you would likely receive is Karl Benz, but the answer may be a lot more complicated. One of the first questions you would need to clarify is exactly what the definition of a car is. When defining a car, most people would only give a broad definition, such as a vehicle that travels on wheels, but this leaves many questions, such as what number of wheels does the vehicle have and what source of power does it use? As you can see, the question of what a car really is quickly can become confusing. Let’s take a closer look at the question and who may have truly invented the first car.

The Controversy Over Who Invented the First Car

The common definition of a car is a “vehicle powered by a gas engine,” as Karl Benz patented in 1886, then the first car was, in fact, invented by Benz. However, this classic car was based on the work of many inventors who came before him, including Leonardo da Vinci who in the 15th century had created designs for a modified vehicle that could run under its own power. Though this design had a relatively unfeasible spring-based power source that the user would need to wind up, it could, in fact, still run. Even more surprisingly, it still used a steering column and rack and pinion system, which is the same way we steer our vehicles to this day.

Da Vinci was not the only individual to beat Karl Benz to designing a self-propelled road vehicle. Several other inventors designed and built vehicles that could run using a variety of power sources and numbers of wheels. So, when it comes to the question of who invented the first car, you can see the question really comes down to what your definition of the car is. Here are a few of the most notable “cars” and inventors who could be said to have been the first to invent the car.

There were several inventors that used power sources other than an internal combustion engine to run their vehicles, and here are some of them. 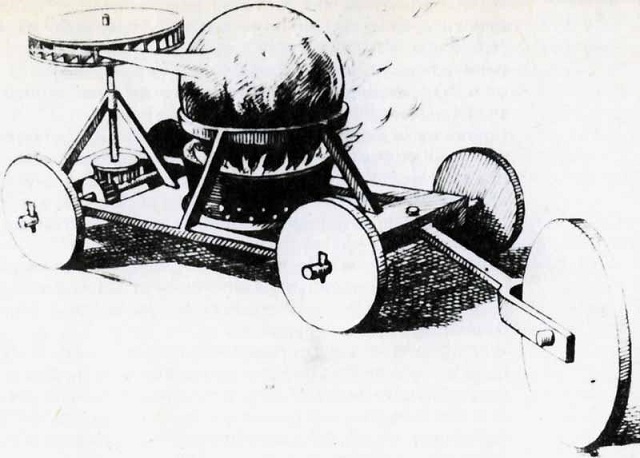 The steam 'car' designed by Verbiest in 1672, Public domain, via Wikimedia Commons

Ferdinand Verbiest, a Jesuit missionary, invented one of the earliest vintage cars in 1672. It was made as a toy for the Emperor of China. It was steam-powered and used a boiler to power the rear wheels, which propelled the car.

Simon Steven invented an early vehicle as well in approximately 1600 in Holland. This “antique car” was very interesting. It was called a sailing chariot and looked a lot like a sailboat on wheels but was powered by the wind. The sailing chariot could hold around twenty-five people and travel at almost twenty miles per hour for a two-hour trip. The reliance on the wind made the sailing chariot less than reliable since it is not always windy. Also, even if the wind is blowing, it might not be in the direction the passenger wants to travel. 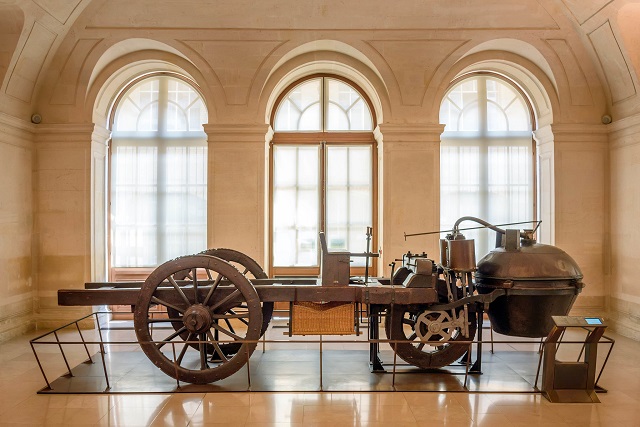 Another early inventor that could possibly be considered to have invented the first collectible car is Nicolas-Joseph Cugnot. He was creating a way to transport cannons to be used by the French Army. So, he made a three-wheeled, two-and-a-half-ton, steam-driven machine to carry out this task in 1769. The machine was able to travel at two and a fourth miles per hour. However, the boiler did not work so well and needed to be relit frequently. It also was rather unstable due to the weight not being very well distributed. Still, the vehicle did carry passengers and worked. So, Nicolas-Joseph Cugnot could possibly be considered the person who invented the first car. The vehicle he invented stills exists and can be seen in a museum in Paris. 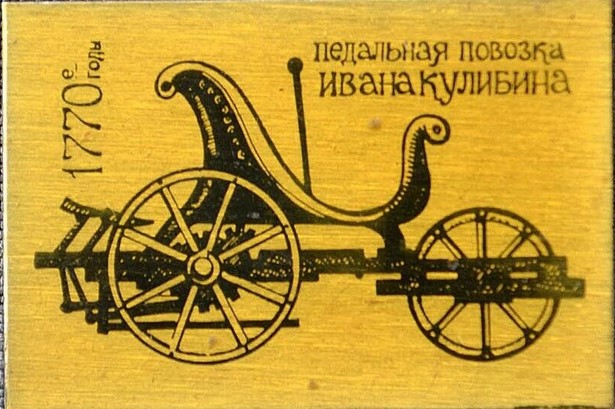 Ivan Kulibin invented a type of the car that had a gearbox, a flywheel, and bearings. However, it only had three wheels and was human-powered, so to many people, it could not qualify as the first car.

In the 1800s, several inventors would use the internal combustion engine to power the vehicles they invented. Here are some of these inventors. 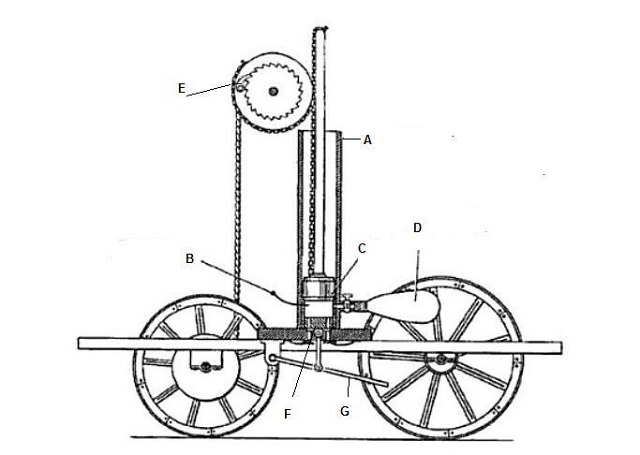 François Isaac de Rivaz might also be thought to have invented the first car. In fact, he did build the first internal combustion car. In the 1800s, he started working on a design for an internal hydrogen-powered combustion engine. He then built the engine in 1807, which he called the de Rivaz engine. He even patented the engine. After completing the engine, he made a car for the engine, which ran on oxygen and hydrogen. Unfortunately for François Isaac de Rivaz, his car did not become a commercial success. 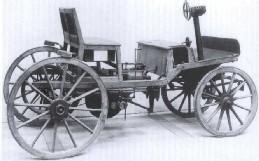 Gustave Trouvé also invented an early version of the car. He invented the first marine outboard engine. Then, he took this engine and adapted it for use with a pedal tricycle. Trouvé invented the first electric vehicle as well in 1881, that same year. 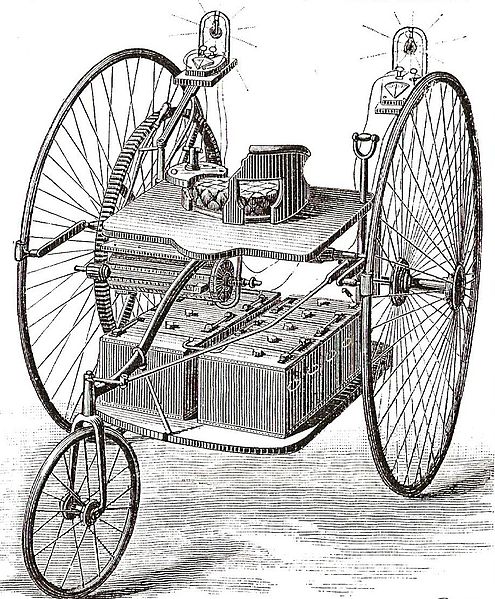 William Ayrton & John Perry, both from England, built an electric tricycle. It had two large wheels in the back and one in the front. It also had electric lights. The electric tricycle was run by 10 lead-acid cells and had ½ horsepower. The driver could change the speed of the electric tricycle by turning the lead-acid batteries on and off one at a time. The tricycle could achieve a speed of nine mph and drive for 10 to 25 miles.

In 1882, a company called Elwell-Parker Ltd. was started in Wolverhampton, England. This company produced high-capacity rechargeable batteries. However, the company expanded to make controllers, dynamos, and motors as well. Thomas Parker, one of the owners of this company, claims to have invented a working electrically powered car as early as 1884. By 1885, electrically operated trams invented by Parker were transporting passengers in the city of Blackpool, England. By 1890, these trams were also transporting people around Birmingham, England. Thomas Parker would go on to invent cars with four-wheel steering and hydraulic brakes on all four wheels. 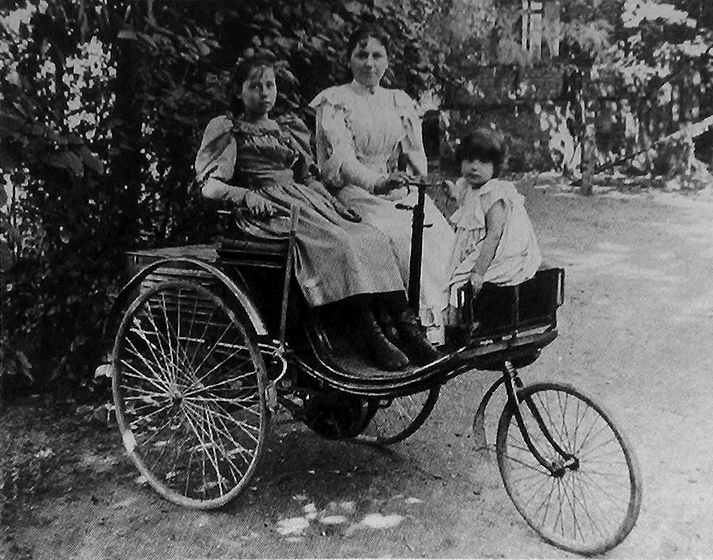 Although it is argued over, the Motorwagen introduced by Karl Benz is often credited with being the first car. This is since it was the first truly functional car and the first production car.

Karl Benz started Benz & Companie with his wife Beth after previously having owned an iron foundry and mechanical workshop. Once Benz started his new company, he would work on static gas engines, create a horseless carriage, and invent the car. Benz’s experience leading up to this was important. He had a lot of experience with bicycles and other technology. He had already filed for several patents before he started working on gas engines and creating a car.

Karl Benz got a patent for his first gas-powered engine in 1879. He also invented spark plugs, carburetors, a throttle system, a clutch, battery-powered ignition systems, the water radiator, and gear shifters. In 1885, Benz invented the gas-powered car and got a patent for his Motorwagen. It had a four-stroke engine and could hold two passengers. Benz would make some adjustments to the car in 1888 before he started selling his model 3 Motorwagen. 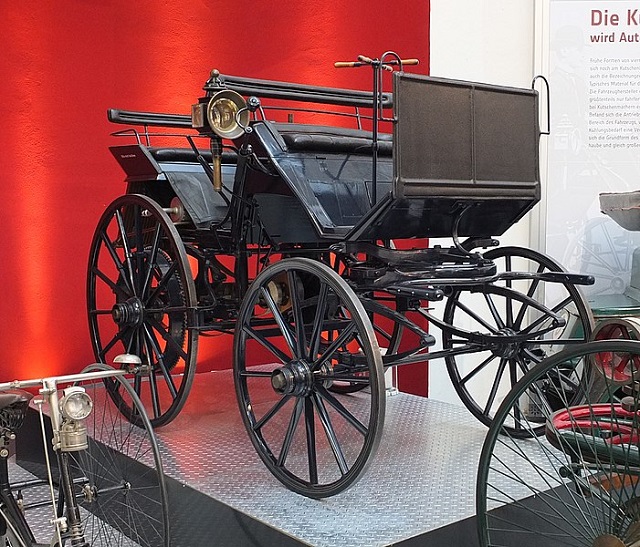 In 1886, Gottlieb Daimler took an engine that he and Wilhelm Maybach made by improving Nikolaus Otto’s internal combustion engine and placed it in a stagecoach that was adapted to hold the engine. This was the first automobile with four wheels. Then, in 1889, Daimler and Maybach built their own original car without adapting it from another vehicle as had been done in the past. 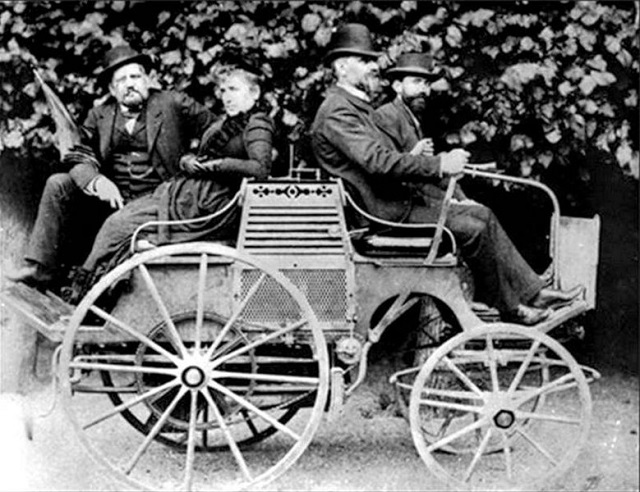 Panhard & Levassor, a company owned by Louis François René Panhard and Émile Constant Levassor, was the first company formed solely to manufacture cars. They started manufacturing automobiles in 1889. They were followed by Peugeot in 1891. Daimler and Benz would not begin to manufacture cars until later. They licensed their patents and sold their engines to other car manufacturers before starting to manufacture their own cars.

As you can see, determining who invented the first car can be more difficult than it seems. The most difficult part of determining who invented the first car is figuring out what exactly makes the car. If you define a car as a four-wheeled self-powered vehicle powered by internal combustion, then Karl Benz may just be the inventor of the car. However, if your definition of the car does not include the number of wheels or power source, then there may just be a number of inventors behind the “first” car.