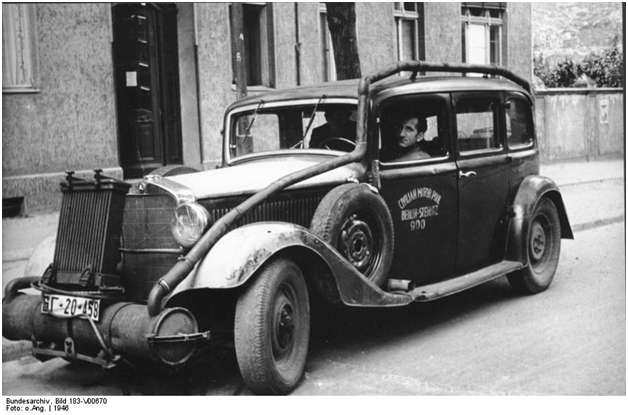 We are all familiar with fueling up our cars at the gas station as well as the expanding electric battery-powered vehicle technologies, but there used to be a different type of vehicles cruising the streets: firewood powered (also called producer gas powered) vehicles. While the process of “gasification” was likely developed in the 1830’s, the first documented record of wood gasification is from the 1870’s when scientists discovered how to use the process to generate power for streetlights and cooking appliances. Around the 1920’s, a German scientist found a way to use wood to fuel vehicles, and his invention later became known as the Imbert generator, which ended up being used in around 10,000 cars by the end of the 1930’s.

While using gasification for wood powered vehicles was a fun and innovative method of fueling a car when it was invented, petroleum supply became low during World War II and caused a serious need for other ways to fuel vehicles. Wood gas generators became widely used, including in the United States and Europe, and the process of gasification was used to convert firewood (and coal) into fuel for vintage cars. This included the renowned Volkswagen Beetles, which were “refueled” through a hole in the hood of the car.

By 1945, it was estimated that 1 million vehicles in Europe ran on wood. Finland alone had seventy factories that prepared wood for vehicles, and other countries such as Italy were looking for alternative fuel sources because of trade embargos. Germany’s oil supply was sharply reduced during the war due to the military needing it, so gasifiers were made mandatory, heavily advertised, and utilized. (Little known fact: There was a so-called “black market” for petroleum and it is estimated that 8% of petroleum was purchased illegally during the war.)

Back in wartime, wood also powered buses, trucks, tractors, and boats throughout the world, mainly in Europe. At the end of the war, petroleum availability returned, and manufacturing of these vehicles basically vanished so wood-powered vehicles quickly become collectible cars. Nevertheless, gasification is currently still used for heat, electricity, and renewable energy, and it has not been forgotten about in regard to wood. In 1989, the Federal Emergency Management Agency (FEMA) even released an instructive guide to building a “simplified wood gas generator” in the case of a “petroleum emergency.”

The U.S. Forest Service also has not considered wood power a thing of that past, as a 2010 experiment was “investigating ways to use small diameter or low-value trees to produce wood gas for heating and cooling and to generate electricity.” While the journal noted the limitations and problems that may arise from wood power, it has not been completely ousted as an option. Certain countries like Russia and China still produce wood gasifiers that are used to run small and large industrial machines. 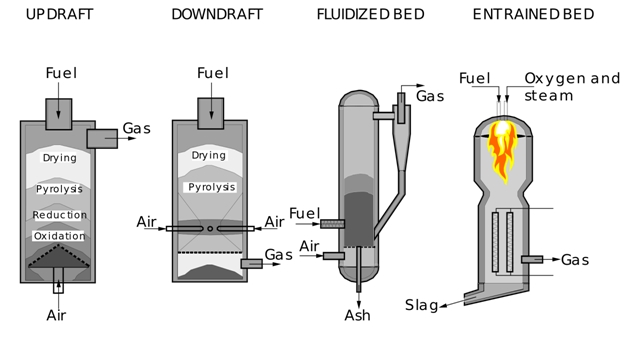 In simple terms, gasification converts any carbon-based, raw material including firewood into fuel gas. Gasification is carried out in a gasifier, which combines high-temperature (around 2,500 degrees Fahrenheit) oxygen and steam with the material that will convert into synthetic natural gas, which can then be used in machines including vehicles. 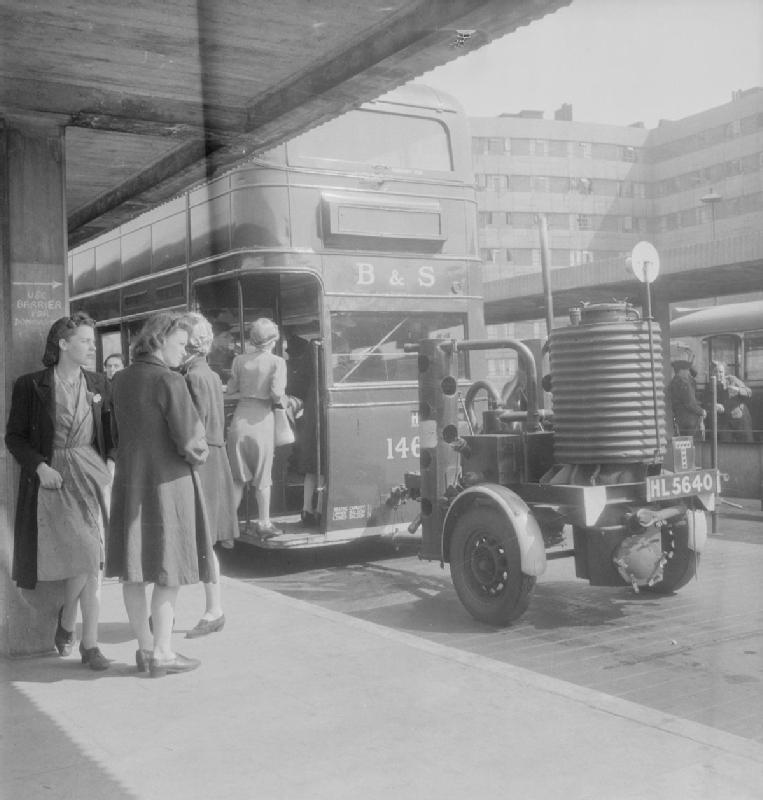 While antique cars couldn’t go very far on one fueling, they had gasifiers attached to them that would get people from A to B as needed. Rumor has it that firewood powered vehicles can possibly be modified to offer a mileage range similar to that of today’s electric vehicles.

Wood gas generators look very similar to today’s water heaters and can be placed in various places on vehicles including in the trunk, on a trailer, in the bed of a truck, or on a platform on the front or rear of the vehicle. During wartime, some vehicles were engineered with gasifiers that were unable to be seen, but most of the time they were quite noticeable. These can weigh hundreds of pounds even when they are empty and have the potential to take up a lot of space and block drivers’ views. 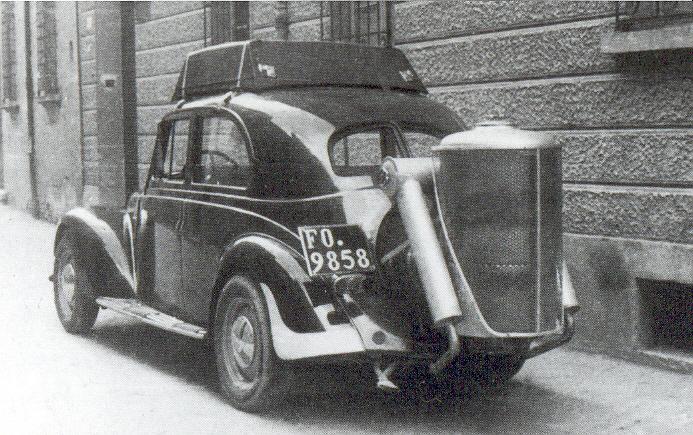 In general, a wood gasifier works to convert wood into wood gas, which consists of gases including hydrogen, nitrogen, carbon monoxide, methane, and others that can collectively work to power an internal combustion mechanism in a vehicle.

In the gasifier systems of the olden days, wood would be inserted into the stove-like mechanism and the high heat would break it down and create smoke before pushing through a layer of charcoal and into a tube under the vehicle. This allowed the power generated to fuel the car and make it run. Once the wood runs out, ash is removed from another hole, normally at the bottom of the stove-like mechanism. Ultimately, the process of wood creating gases that are sent into the engine cylinders is comparable to today’s cars’ gasoline and air process.

Firewood powered vehicles certainly served their purpose in the 19th and 20th centuries, and while petroleum regained ownership of the vehicle fueling industry, researchers and scientists have begun to renew their interest in alternative fueling options. In the 1990’s, many felt hydrogen would be the alternative fuel that would end up being superior to others, but today auto manufacturers have begun to invest more in electric vehicles and other methods. European countries, specifically Sweden and Finland, have been expanding research into wood gas cars since the 1950’s in case of an unforeseen oil shortage.

In terms of being eco-friendly, firewood powered vehicles probably do a better job than gasoline. While the utilization of gasifiers would inevitably increase electricity use due to higher consumption, wood is a renewable fuel and gasoline is not. Aside from actually slicing the wood, firewood powered vehicles also do not require the energy used to produce and refine the fuel we are putting in our vehicles today, making them carbon neutral. The closed carbon cycle does not cause as much harm to the environment as typical cars today.

Wood powered cars also do not require a chemical battery and also emit less air pollution than gasoline-powered ones; in fact, emissions from a wood powered vehicle are close to those emitted from burning natural gas.

Despite the pros and the promising outcomes “woodmobiles” could offer, they certainly aren’t “hot rods.” Using wood instead of gasoline greatly hinders the combustion engine’s output and therefore doesn’t allow for quick acceleration and high speeds. The main difference is that wood gas is made with a lot of nitrogen, which plays no part in combustion and leaves other slow-burning gases to do all the work. Wood-powered vehicles also use carbon monoxide, which can be very dangerous to humans in certain amounts if it goes undetected. Of course, carbon monoxide detectors have improved greatly and are much more reliable now.

As the technology stands, firewood powered cars would potentially be a nuisance to impatient people because they can take approximately ten minutes to heat up, which may cause an inconvenience that we don’t experience with our current vehicles. Also, vehicle gasifiers must be cleaned before every fill to remove ashes and minimize the amount of tar that forms. This could be offset, however, by automation, as a former prime minister of Finland recently developed a prototype for a vehicle with a fully automated gasification system using a computer. Also, the discarded ash can be used as a fertilizer instead of going to waste.

Woodmobiles need a significant amount of wood, seeing as a commonly-referenced manual from the 1930’s noted that a truck would need a whopping 220 pounds of wood to drive 62 miles. The wood also must be dry, which can take up to six months if left untouched and untreated. The type of wood matters, too. Woods that contain a lot of resin are normally not recommended for gasifiers; instead, hardwoods like birch are more productive. 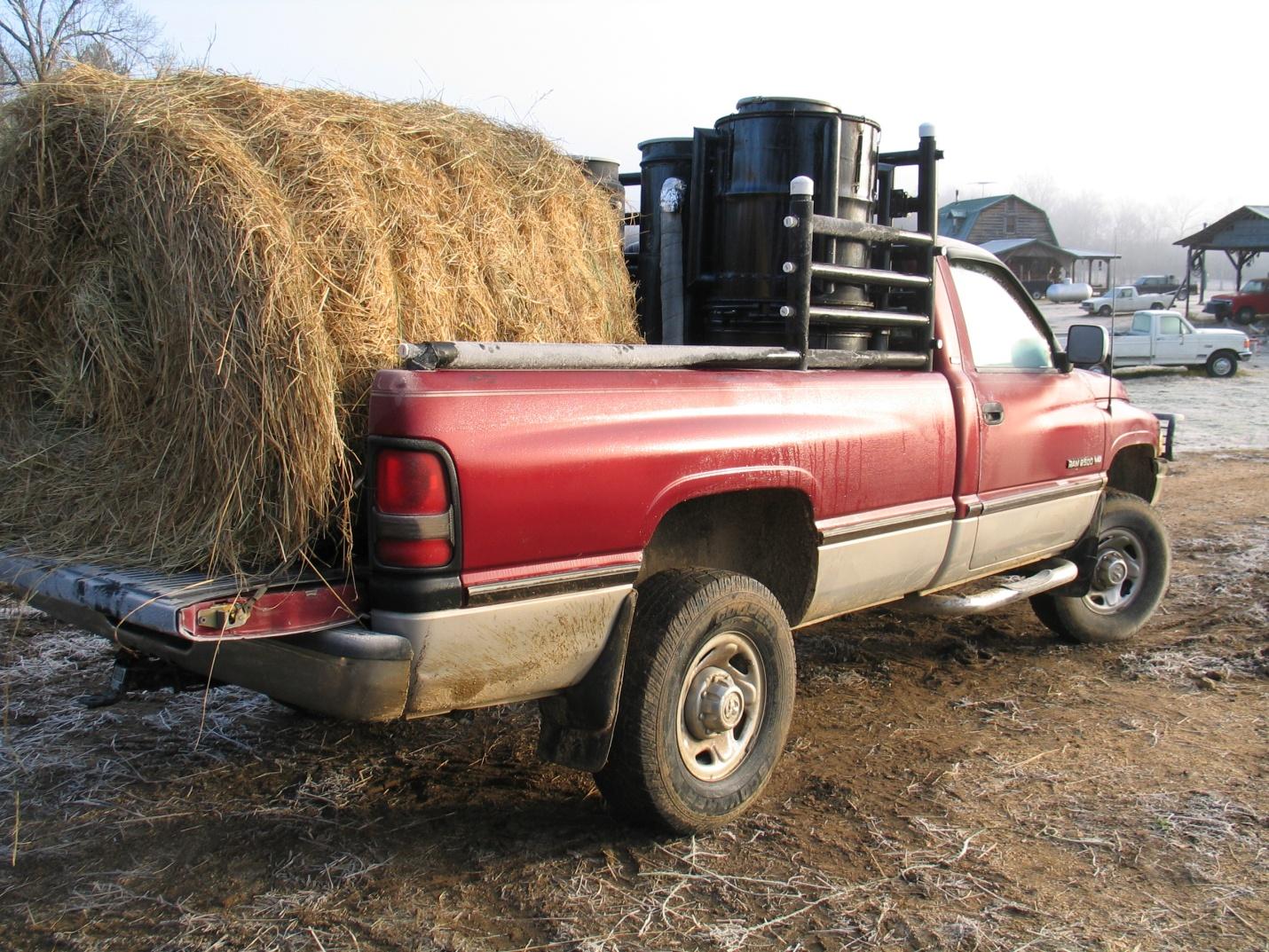 Today, however, some enthusiasts have built their own gasifiers that require less wood, including a Pennsylvanian who can drive 20 miles in his SUV on 25 pounds of wood. It is believed that North Korea sometimes uses wood powered vehicles due to sanctions on the oil and gas imports into the country.

Of course, the issue of deforestation would undoubtedly arise if firewood powered vehicles were manufactured again, especially on a large scale in areas where forests are already in danger. France learned this the hard way during the war when much of its forestland was destroyed, and it is widely hypothesized that making every car wood-powered is simply not sustainable. Perhaps a hybrid could be created, but there have not been any solid experiments conducted on the feasibility.

Automotive manufacturers have steered clear of wood powered vehicles for decades now due to the downsides and problems they pose. However, humans have undoubtedly made incredible technological advances since the advent and disappearance of firewood powered vehicles. Is it implausible that we could develop a more efficient, eco-friendly way to use wood to fuel our cars in the future? Time will tell.