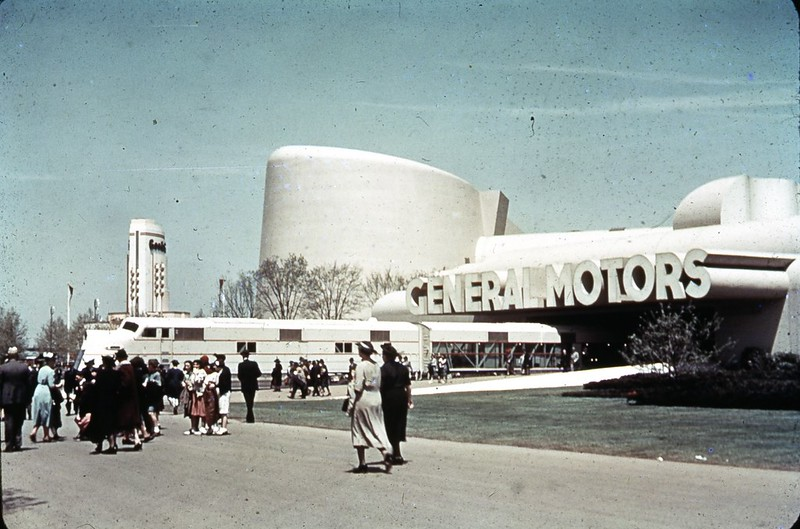 Self-driving cars seem ready to make a debut onto our roads any day now, but the idea behind them goes back further than most would guess—nearly100 years, in fact! From the classic car displays of the World's Fair in the 1930s to today, the public's fascination with cars that can take the driver out of the drive has had a long history. Not just shiny new Teslas, self-driving cars have actually existed in the form of famous collectible cars like Firebirds. So, let's take a look at where these autonomous vehicles have been and where they might be going.

The idea of self-driving cars has actually been around for quite a while. In fact, the 1939 World's Fair sponsored by General Motors showed off many famous and collectible cars, but there was also a display by Norman Bel Geddes that included radio-controlled electric cars.The cars were included in a diorama of a city of the future in which these now vintagecars are controlled by dispatchers.Bel Geddes' concept didn't become a reality by the 1960s as he had predicted, but work on self-driving cars would continue to progress.

The next major development occurred in the 1950s when in 1953, RCA labs developed an arrangement that included a miniature car that was controlled by wires on the laboratory floor. This development inspired Leland Hancock and LN. Ress, who both worked for the Nebraska Department of Roads, to try out the system on a real highway.

An experimental full-size version of this system was installed at an intersection outside of Lincoln, Nebraska. The system was set up by burying a series of detector circuits in the pavement and pairing them with a series of lights alongside the road. The detector circuits sent impulses that guided the cars and determined the presence and velocity of the experimental cars on the road. This experiment occurred after an earlier test of the system in which the system was used as a traffic counter.

On June 5th, 1960, the system would be demonstrated again. This demonstration occurred in Princeton, New Jersey, at the headquarters of RCA labs.

Also, during the 1950s and 1960s, General Motors, maker of both some of the world's most popular collectible cars and new driving technology, had an experimental car made from a Firebird. This vintage car was said to have a guidance system that was supposed to work withouta driver.Combining a classic car series like the Firebird with self-driving technology made this experimental vehiclea fascinating detour in automotive history.

In the 1960s,Great Britain got its own driverless,now antique car, avariant of theCitroen DS. This modified car made its share of automotive history by driving on a test track at a steady speed of 80mph in various types of weather, doing a better job than a human would.

The test continued into the 1970s,performed by the United Kingdom's Transport and Road Research Laboratory on a road with magnetic cables embedded in it. These cables then interact with the car and are operated by communicators on the roadway, which sent computer messages. Although the experiments continued for a while, they ended in the 1970s when funding was discontinued.

There was never a lot of demand for these types of self-driving cars. Also, building the guided-vehicle roads necessary for some of these self-driving cars would have been incredibly expensive.By today, they look like nothing but interesting yet impractical antique cars. But the interest in self-driving cars continued.

Scientists would start to experiment with using computers to control cars. Stanford University built robots that could follow white lines and avoid obstacles. Research and experimentation would continue, and in the late 1970s,engineers at the University of Tsukuba's Mechanical Engineering Lab would test a self-driving car on Japanese roads.

Work would continue on developing self-driving cars. In the 1980s, a driverless Mercedes-Benz robotic van developed by Ernst Dickmann in Munich, Germany,reached 63 mph on the road without traffic.

Carnegie Mellon University became the leading competitor in the 1990s as people from countries around the world tried to build self-driving cars. There was increased success by the end of the 1990s with cross-country trips by self-driving cars in Japan, Germany, and the U.S. Also, in 1995, aself-driving car drove up to 130 kilometers per hour and changed lanes without any help from humans.

Research would accelerate in the 2000s as the pentagon got involved in the race for autonomous vehicles.In the early 2000s, the Defense Advanced Research Projects Agency ran competitions for American autonomous vehicles,which was successful in encouraging innovative research. These competitions occurred in 2004,2005, and 2007.In 2005, there was a winning vehicle from Stanford University.

This contest helped people see more potential in automated cars. No longer were self-driving cars the stuff of vintage sci-fi like the innovative but impractical antique cars that ran tracks at the World Fair. However, the recession slowed down investment in this technology. Although in 2009, Google would start a project for self-driving cars.

This move by Google created a lot of interest in self-driving, some by major companies. Although, Google's goal in starting this project was less to produce self-driving cars and more to start a service to help people who couldn't drive. After Google started its project, a number of other companies acquired startups to obtain new technology in an attempt to develop self-driving cars.

Another competition would take place in 2010 that would lead to more improvements in self-driving vehicles. It was the VisLab Intercontinental Autonomous Challenge. The challenge was 13,000 kilometers in length and would take almost three months. It went from Parma, Italy, to Shanghai, China.

It involved four highly autonomous vehicles loaded with goods and showed that goods could be transported between continents with very little human help. This challenge showed that driverless cars could be nearly as safe and effective as driver-controlled cars.

It gave Audi a chance to exhibit its Audi TTS, which had a system a lot like the autopilot on a plane. Volkswagen had a similar system in its car that allowed the car to operate semi-autonomously. This car had a number of driver-assist functions, such as adaptive cruise control and ultrasonic sensors. But, the car allowed the driver to take over control at any time.

Although, they are still spending a considerable amount of money in attempting to develop true self-driving technology. No car manufacturer has truly succeeded in this yet, including Tesla. In fact, the German government requested that Tesla stop using the term full self-driving.

Some cars today come close to being fully self-driving. These cars can handle some or all steering, brake if they sense an obstacle, and maintain posted speed limits. Features such as these make the cars safer and easier to drive, but they are still meant to have human intervention readily available.

The Future of Self Driving Cars

Although it's hard to say when self-driving cars will become commonplace, there are many advantages that could come with this technology. There would be fewer traffic deaths and potentially less traffic congestion. Also, with cars driving themselves, senior citizens, people with physical disabilities, and young people would be able to travel more easily. Fully self-driving vehicles with advanced road navigation systems and complex AI could make today's models look as simple as yesterday's computerless vintage cars.

Traffic fatalities should significantly decrease since most of these fatalities are the result of human error. There are approximately 1.4 million traffics deaths worldwide each year. If self-driving cars became common, many of these deaths would be prevented, which is a significant savings of lives.

The decrease in traffic congestion would save a lot of time for the many people who are stuck in traffic every workday. Less time wasted would mean less money wasted. This may even extend to insurance. Whereas most modified car insurance costs much more,tomorrow's car insurance could be lower due to fewer accidents.With self-driving modified cars, many wonder if we will need insurance at all.

Help for Those Who Can't Drive

Autonomous cars will also be a big help to those who can't drive themselves. It would allow more people with disabilities to enter the workforce. Senior citizens would be able to get to medical appointments on their own, and young people could more easily get to activities. These cars would allow many people to participate more fully in society.

Self-driving cars may only now be on the verge of being brought to market, but they actually have a long history behind them. From the 1930s to today, many inventors and engineers have dreamed of creating a car without the need for a driver. So, the next time you see a Tesla driving on Autopilot on the highway, think about the nearly 100 years of work that have brought us so far.