The History of Record Players in Cars 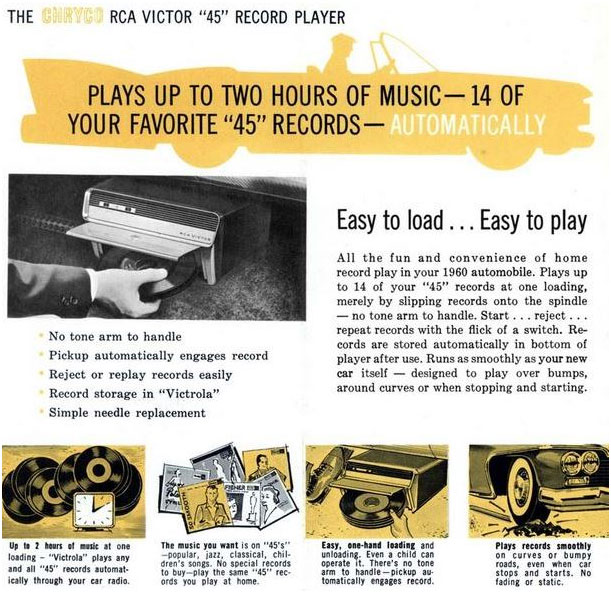 In the 1950s, anything seemed possible. The United States was recovering from a World War and feeling very confident in its future. It felt like America was rising like a phoenix from the ashes of the war, and new inventions were everywhere. Technology was heading in leaps and bounds toward the advancements that would take men into space, and home gadgets and gizmos were being created that were intended solely for convenience.

One of the places where the luxury of the 50s and 60s was felt the most was the car market. Cars were no longer boring and drab boxes on wheels that could get you from place to place. Cars were suddenly a sign of luxury and having a car with all the extras said something about a person. Enter all kinds of wacky comforts and upgrades, including the record player making its appearance in vehicles.

Record players in cars was a dream that would one day lead to the reality of portable music that we all know and take for granted. 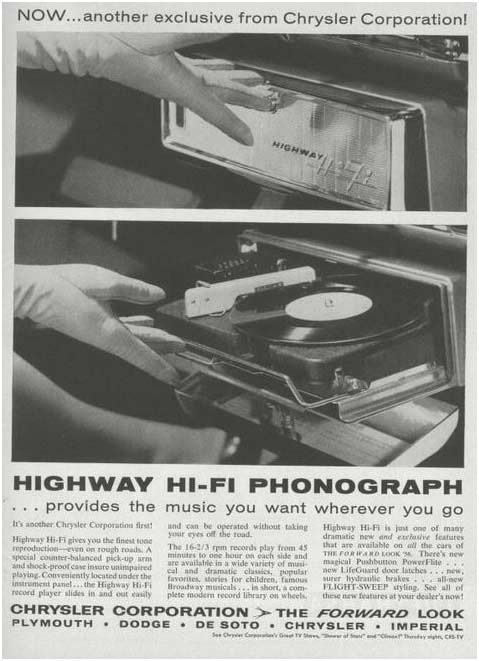 Everyone who hates the radio today has the same complaints that people in the 50s and 60s had. There is never enough music, and there are too many commercials. Plus, waiting for your favorite song to come on could take hours. Radio has always been one of the least pleasing parts of going on a road trip, and in the days before there were other options, it could sometimes be less enjoyable than silence.

The rise of the record player in homes made some people question whether record players could be used in other settings. What if your road trip could be accompanied by your favorite music? What if your records could go with you on road trips? And so, the quest for a solution to this problem was imagined by car designers. Could a record player be added to a vehicle?

The first in-car record player was called the “Highway Hi-Fi Record Player.” This was a device designed by Dr. Peter Goldmark, who was the head of CBS Laboratories. CBS was the inventor of the Long-Playing microgroove record or LP. This record player was first offered in Chrysler products. At first, it seemed like a win.

At this time, there were two record formats that were competing for the market. These formats were the CBS, which was pushing the LP and classical music, and RCA, which was made for the 45-rpm single. When record players were being added to cars, there was always the question of which was the best record type for each situation.

The 45-rpm was more manageable in a car due to its size. However, this record needed to be changed every three to four minutes. Goldmark was obsessed with the question of how to make record players work better and more efficiently in the car. He and CBS decided that there needed to be a new record format.

What if there was another recording format that was suited perfectly for vehicles? This was the question that Chrysler and people like Dr. Goldmark asked. And it led to work to try and invent a solution to this problem because people wanted to bring their music with them in the car and be free from the boring radio once and for all.

Dr. Goldmark succeeded. There was a new record format that was created that was meant to fix all of the issues with old formats. This was supposed to be the solution that made records in the car easy to use and better than ever.

The new format slowed the turntable down to 16 2/3 rpm. This was half the speed of the LP. There were stabilizers that were added to the arm to keep it from skipping and scratching. This was called Highway Hi-Fi by Chrysler, and it was very popular.

The first records were produced by Columbia, and they offered many popular tracks. These tracks included work by Percy Faith, Cole Porter, and more. These were the hits of the time, and they were meant to be an inducement to make more people want to invest in this new technology.

Consumer records did not test the product before it was added to vehicles, but the price tag of nearly $200 would have been a constraint for many people. This is $1,700 in today’s money!

The problem with this record was that it could only be played in the car. You could not just grab your favorite records and head out to go on a drive. This was also an option that was only available on some cars, and they were new cars. There was not a market that was needed to generate lots of records to feed this interest.

The other trouble was that the record players kept breaking. Only one year into the process of adding record players to Chryslers, they began to withdraw the option from production. By the end of 1957, these gadgets were already slated for the junk heap.

A Cheaper Option Hits the Market

The testers found that the record player would hold 14 records and that these records would play for two and ½ hours. This was only if extended 45s were used. This record player was also found to be easier to operate, and it allowed you to focus on the road rather than changing the record. Distracted driving has always plagued road safety, and if you think that changing a CD out from your disc changer is distracting, imagine changing out a record!

A year later, there was a new record player produced that was made by Norelco. This was called the Auto Mignon. This player only held one 45 rpm record at a time. This was just four and ½ minutes of playtime. The Norelco also did not store records, so storage was an issue within the car. Having access to your records while you drove was never easy, and having loose records in the car could easily lead to broken and damaged records.

Surprisingly, these new record players were actually relatively stable and did not skip when you drove. The stylus never jumped over the grooves, even when driving over ruts and grooves. These units also ran faster than the Highway Hi-Fi. This made it sound better and helped to make sure that your other records would play on the record player in your car.

Replaced by the Eight Track Tape

The right track tape quickly came on the scene to replace the record player. These were portable music devices that were easy to store and easy to insert while you were driving. You were also able to listen to lots of music without changing the tape as well. This was revolutionary, and the eight-track tape solved the problems that could not be resolved through the invention of new kinds of records.

Today’s reality of virtual music that can be carried in your hand-held device would not have been possible without the experiments with record players in cars. The motivation that led to the portability of music was the thought of bringing your music with you on adventures. The concept of a boom box, a portable CD player, or even an iPod would never have been a reality without the thought of putting a record player in a car.

Even if the record player in the car idea flopped, it opened the doors to so much more technology. It’s hard to imagine a reality without portable music. You can thank the original car record player for the music that you love to listen to on your phone.