Sno-Runner: The Retro '80s Machine Built to Save Chrysler 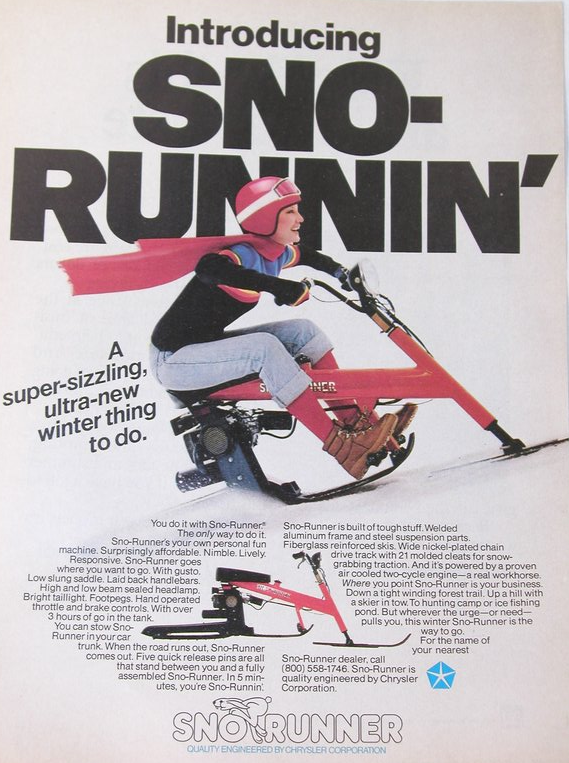 Perhaps no other car manufacturer has had more of its shares of ups and downs during its existence than Chrysler. Throughout its lengthy existence, Chrysler has been the subject of buyouts, takeovers, and complete overhauls of the corporate structure.

One of the most surprising attempts at saving the company in the 1980s was none of those. Nor was it even a car. The children of the chief engineer, Steve Quick, remember hearing it called the "snow bike" when he proposed the design to Chrysler in 1975.

The Sno-Runner is a single-person vehicle with a single ski on the front for steering and a three-inch wide track to provide forward power. This lightweight vehicle weighed just over 71 pounds, and since it was collapsible using five quick-release pins, it could fit in the trunk of even a subcompact car.

Why Was It Made?

These vehicles did have their drawbacks. As the Cold War and the potential for combat in winter-like conditions intensified, Steve Quick saw the advantage of a lighter weight, single-person tracked vehicle. This would still provide the all-terrain capabilities of a tank but would be much more mobile and able to be transported nearly anywhere. 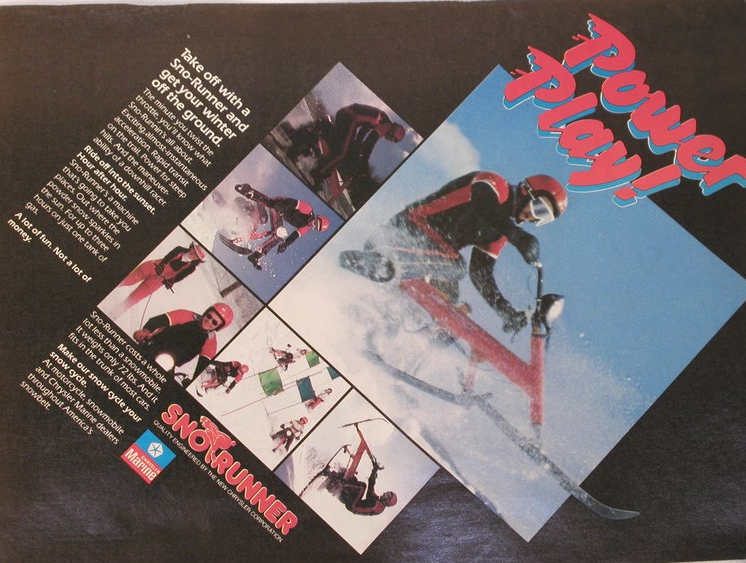 Even without a successful contract with the US Military, the potential recreational uses for the Sno-Runner seemed to make it primed for success. Even looking at modern winter sports equipment and vehicles, there might not be something as transportable as the Sno-Runner.

However, in the push to put the Sno-Runner into production, major design analyses and testing were overlooked, and bypassed for an earlier roll-out. Although Chrysler used a proven engine from its inventory, this testing bypass led to a more restrictive header and exhaust system that cut the total available power by 12%.

This loss of power is considered by most to be the "fatal flaw" of the design. As produced, it was only capable of flat terrain and groomed snow, a far cry from being all-terrain and able to take on deep powder as it was marketed.

Add on its pricing, sales of the Sno-Runner were nowhere near what was hoped for, and did little to save Chrysler. At just under $700, it was quite a bit cheaper than a full-sized snowmobile. However, it was still considered relatively expensive for something that could be used only a few months out of the year.

Within two years after starting production, Chrysler ceased building the Sno-Runner and sold off the remaining surplus inventory to the liquidation company, COMB, who would eventually sell the renamed Snorabbits for $299. 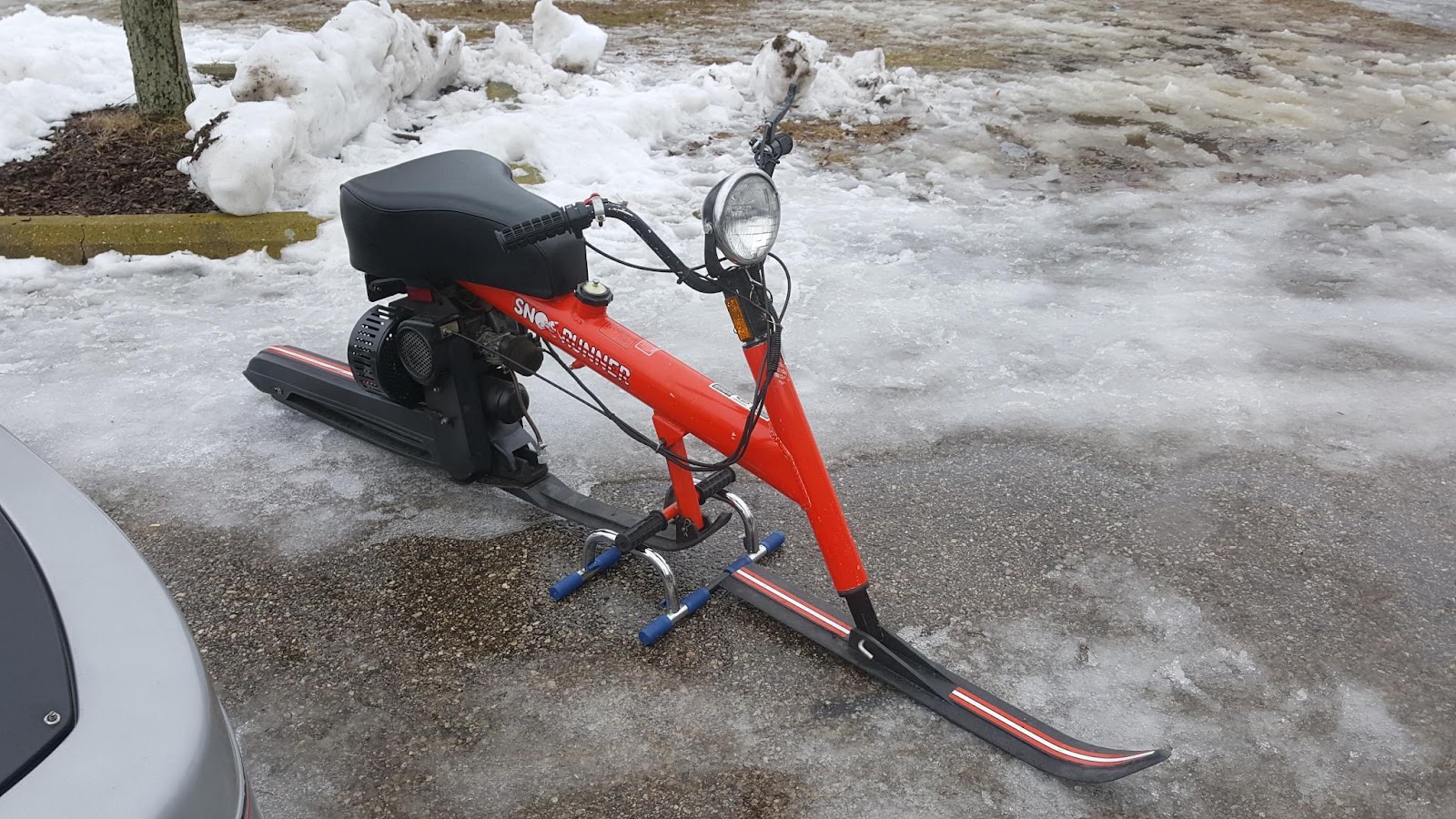 Though Chrysler may not have made the Sno-Runner in several decades, there has been quite a recent resurgence in the cult following of the Sno-Runner. Finding a Sno-Runner is becoming increasingly difficult, but they are available. Depending on the condition and how much of it is original manufacturing, the price can reach over $2000.

Although the Sno-Runner may still have its place in the recreational vehicle market, without modification it still comes with the fatal flaw of being woefully underpowered.

One of the easiest modifications to bring the Sno-Runner close to what it was designed to do, is to replace the muffler and exhaust system with one that is less restrictive than the original. In some cases, this brings the available horsepower up from 7 to 10.

This does add a bit to the purchase price, but considering it increases total power above what it was originally designed with, it might be a more than fair trade-off.

Along with the cult following of collectors and hobbyists, there are also several uses today, for the Sno-Runner. Taking advantage of the collapsibility and portability, it makes a perfect chore vehicle for cabins and camps in northern regions with long durations of snow.

It may not have nearly the same abilities on the snow as a full-sized snowmobile, but it makes a great winter camping vehicle where tight spaces between trees may be a concern, along with minimizing impact to the environment.

A Failure for Chrysler, But Not for Itself

Overlooking the minimal power with which it was designed, the Sno-Runner still had, and likely still has a lot of potentials. It may not have helped at all to save Chrysler. In some estimates, the total project may have cost the company money.

It also never made it beyond preliminary testing with the military. However, its lack of success may be due to the reason it was rushed to production, rather than any particular trait of the vehicle itself.

Consider if the Sno-Runner was given ample time in pre-production, to home in on an exhaust and header system to match the proven engine Quick designed it with. The small width of the front steering ski and short track runners would still exist. But with the power Quick designed it with, the Sno-Runner would have likely, at the very least, lived up to the marketed expectations.

Perhaps The Timing Was Just Off

Another consideration is the time of when it was designed. Looking at the current winter recreational vehicle market, one would be hard-pressed to find a vehicle that combined mobility in the snow with portability in nearly any car. The technological advancements of modern motors and power systems would likely also add to its performance.

Removing the influence, it had on Chrysler (seemingly negative) and reason why it was designed at all (as a last-ditch effort to save a struggling car company), the Sno-Runner could have been a massive success. The Sno-Runner may not be perfect, but its production rush exemplifies the adage of "taking a good thing and ruining it."