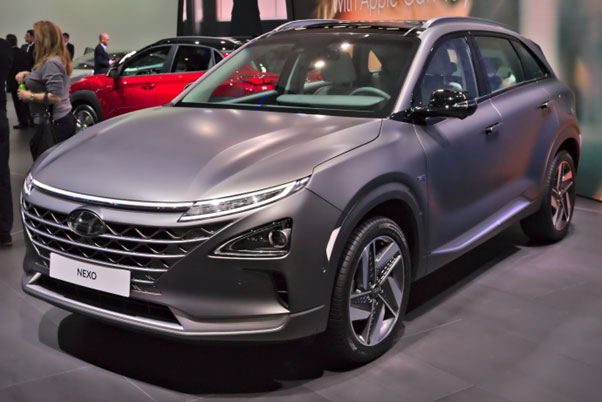 Imagine a car that doesn’t use fossil fuels, never needs to be recharged, and releases only water out of the exhaust – it sounds like science fiction, but this is the promise of vehicles powered by hydrogen fuel cells. While long touted as the future of passenger cars, hydrogen fuel cells might now seem the forgotten cousin of lithium-ion battery electric vehicles as they gradually replace traditional gasoline consuming internal combustion engines. But how do hydrogen fuel cells work, and do they still have a place in the future of our roads?

Fuel cell powered cars use the chemical energy of pressurised or liquid hydrogen as a fuel source, but, unlike the internal combustion engine, fuel cells don’t release that energy as heat by burning the hydrogen. Instead, hydrogen is electrochemically split by a platinum catalyst within the fuel cell to release hydrogen ions and electrons. The hydrogen ions permeate through a membrane where they react with oxygen to form water molecules, while the electrons are siphoned off in a current which provides the electrical energy that powers the car. Rival lithium-ion battery cars similarly use electrical energy to generate motion, but instead of using a fuel input like hydrogen, they store energy within the battery through charging on the electrical grid which is then released to drive the vehicle. The differences between these two competing rival electric vehicle technologies, though subtle, has major implications for how they may be used, and how successful their uptake is proving. 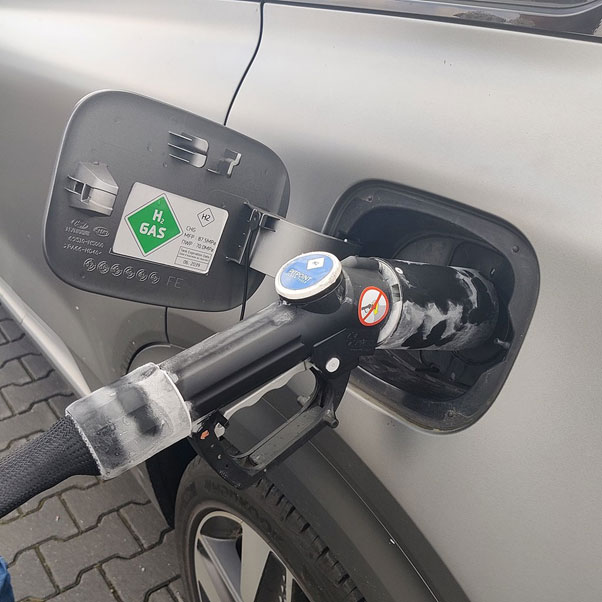 Advocates for hydrogen fuel cells point to their several advantages over classic car engines and lithium batteries. Besides their independence from environmentally destructive fossil fuels, hydrogen fuel cells provide significantly higher energy density than lithium batteries enabling them to be much smaller and lighter for better vehicle performance. Moreover, fuel cells offer a long range from a single refuelling comparable to gasoline cars and can readily be topped up with hydrogen at a filling station in a matter of minutes, avoiding the lengthy recharge times that are a major turn-off for most long-distance car drivers. So why are hydrogen powered vehicles, as a zero-emissions technology with performance advantages over mainstream electric cars, not a common sight on our roads today?

A major obstacle for the hydrogen powered dream has long been infrastructure. The inherent properties of hydrogen require it to be pressurised or liquified and, combined with its explosive nature, makes it a potential major hazard during storage, transportation, and dispensing. The capital investment needed to ensure hydrogen refuelling is accessible nation- and worldwide is sufficient to make governments think twice before backing the hydrogen powered horse. These difficulties are apparent from the numbers: only 49 hydrogen filling points were available in the US in 2021, compared to 42,830 electric charging stations. For the environmentally conscious consumer, this is a critical issue when choosing between a hydrogen and battery car – never mind the fact that only two hydrogen cars are currently available on the market compared to the plethora of battery powered options. Clearly then, hydrogen cars are losing the argument, but, more than anything else, this may be down to doubts about their green credentials.

The environmental impact of any technology must be assessed across the entire lifetime of the product and, while a fuel cell may only be generating water vapour, the providence of the hydrogen fuel is much less clean. 95% of the hydrogen produced worldwide is made through an energy intensive process using fossil fuels that releases carbon into the atmosphere. The hydrogen then needs to be pressurised in tanks or cooled down into the liquid state: in both cases using substantial quantities of energy to do so. Once the carbon footprint for the vast hydrogen infrastructure needed is also considered, the green case for hydrogen cars is looking very flimsy indeed. Even if these problems were to be solved, the basic principle of hydrogen fuel cell efficiency hits up against the laws of physics. Whereas battery equipped electric vehicles take energy directly from the grid, fuel cell cars use that energy to first produce hydrogen which is then transferred back to electrical energy within the car. Considering the losses at each stage in this process as energy is transferred from electricity and back, it’s hardly surprising that the energy efficiency of a fuel cell is far below that of its competitor lithium batteries. Overall, fuel cells require around double the energy of a comparable battery – and with both technologies nearing maturity, it’s hard to see how that ground can be regained.

The Future of Hydrogen Vehicles

So, what future do hydrogen vehicles have on our roads, if any? The increased range and rapid refuelling of fuel cells compared to battery cars may leave some applications better suited to hydrogen technology. While improvements in battery tech may have closed the gap with increased range and performance in electric cars recently, larger vehicles such as trucks require much larger batteries with often unfeasible recharge times. Here, hydrogen fuel cells may prove superior, and with improvements in hydrogen refuelling infrastructure, could be powering the trucks of tomorrow. Electric buses can similarly take advantage of the higher energy density of hydrogen compared to lithium batteries, and China already a have a fleet of over 5000 hydrogen buses. The debate continues however, with the French city of Montpellier recently cancelling a contract for 50 hydrogen buses after citing a 6-fold higher cost of hydrogen compared to electricity.

As the electric vehicle revolution rapidly gains pace, internal combustion engines may soon only be found on vintage cars. Hydrogen fuel cells are a triumph of technical design, but the winner in the race to replace gasoline will surely be lithium batteries with their epic energy efficiency and impeccable green credentials. Cost is often the ultimate consideration when deciding between competing technologies, but even here hydrogen cars lose out with fuel cells being so technically complex they are rumoured to be sold for less than they cost to make. While hydrogen modified vehicles may still have some role to play on our future roads, they could equally find themselves on display alongside antique cars as another footnote in the development of transport.