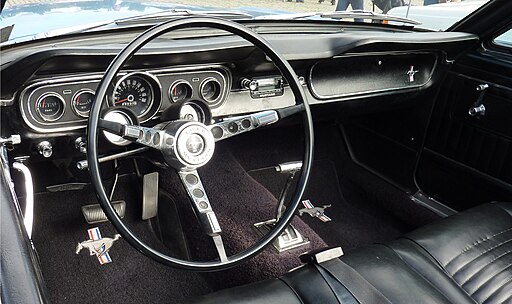 The Ford Mustang is a very popular car. Ever since the first one rolled off the assembly line in 1964, people have seen Mustangs as a workhorse--even the car's logo in a running horse to symbolize its strength, speed, and power. But the Mustang isn't necessarily one of those cars that's reserved only for people who like to drive fast. Many types of people drive Mustangs--students, mothers, doctors, teachers. It's a very assessable car. Since its introduction, the car has greatly influenced the automotive industry.

History of the Mustang

The original Mustang got a head start out of the gate--it was released almost five months earlier than most other 1965 models, and it's been going strong ever since. This first model debuted at the New York World's Fair in April of 1964. An executive at Ford, John Najjar, had actually designed the first Mustang prototype in 1961. That model appeared at the U.S. Grand Prix race in 1962, but it didn't go into production. However, General Manager Lee Iacocca continued to have a vision of his perfect car, a car that he was determined to see created. He and Najjar returned to the drawing board to work out the details of the vehicle and, more importantly, the financing.

Once the funding was approved in 1962, the new version of the Mustang went into production. It actually made use of a number of parts from the Falcon, a similar car. This kept some of the cost down, although the Mustang did feature a number of differences from its sister car. It also had a number of ways that buyers could customize it, creating what Mustang called "the car designed by you."

Where did the name come from? According to rumor, it was suggested by Najjar, who took it from the P-51 Mustang fighter plane used in World War II. An alternative story says that Robert Eggert, a marketing research manager at Ford, came up with the Mustang name. He supposedly took it from the title of a book by J. Frank Dobie (The Mustangs) that his wife gave him as a gift.

Features of the Mustang

The first Mustang, the T-5 prototype, actually made use of a V4 engine from a German Ford Taunus. While its design wouldn't stick this time around, General Motors would later pick up the design for the 1984 Pontiac Fiero.

The first batch of Mustangs, those that were released early, are sometimes referred to as the 1964 model because they have a few interesting quirks that were later corrected. This includes the fact that the Ford Mustang logo was applied over a Ford Falcon logo in several places.

Mustangs were successful in the racing world almost as soon as they were launched. The car was used as a pace car in the 1964 Indianapolis 500, and later that year, it won first in class at the Tour de France. It was also a favorite in illegal drag races. The model has continued to win races, including dominating at the 50th Anniversary Rolex 24 in 2012, beating out six BMWs for the trophy.

Different Models of the Mustang

The earliest Mustangs were produced from 1964 to 1973. These early models were manufactured in Dearborn, Michigan. These models weren't expected to be a success--in fact, no one thought they would sell 100,000 of them within a year. The Mustang met this goal within three months.

The car underwent a number of changes over the years. It the car continued to get heavier and bigger with every new model. Many drivers didn't like this. The Mustang was originally about speed, but these heavier cars focused more on luxury. The models produced between 1971 and 1973 proved to be fairly unpopular, and sales dropped.

The second generation solved those problems. Starting in 1974, the body design began to return to its roots, and the car lost a lot of the weight it had gained. Ford began working to improve performance every year. One interesting model produced during this time was the luxury Ghia model, a car designed by Ghia of Italy.

The 1979 Mustang was the first of the third generation. It ran from 1979 to 1993, but during that time, only two body styles were used. One featured four headlights and was nicknamed the four eyes, while the other was more rounded in the front. Sales once again dropped, but that changed in 1987 with the introduction of the new and improved look of the Mustang.

Another major redesign occurred in 1994 at the start of the fourth generation. This new look incorporated some of the most popular designs from previous years, although this was the first time in two decades that Ford decided to drop the hatchback version of the Mustang.

The fifth generation ran from 2005 to 2014. Once again, a redesigned model ushered in this age. These models continued to build on the sleek, fast look that Mustangs are known for. They were lighter than many previous models and faster.

The newest generation of Mustangs began in 2015, although the demo model was first shown to the public in 2013. This model includes a slightly wider body, a larger passenger area, and an updated independent rear suspension that was created specifically for this new Mustang.

One doesn't need to look very far to see how popular the Mustang is. In 1966, just a couple of years after the Mustang hit the market, Wilson Pickett wrote the song Mustang Sally. This song helped establish the car as a must-have item. A couple years later, a Mustang was featured in the movie Bullitt, where Steve McQueen drove one during the now-famous car chase scene.

In 1964, one of the earliest Mustangs appeared in Goldfinger, a James Bond movie. Later, in the Bond film Diamonds are Forever, a Mustang Mach 1 played a major role. There are three different owners of 1971 Mach 1's who claim their cars were used in the film, although only one is verified.

In 1974, H.B. Toby Halicki produced Gone in 60 Seconds, an independent movie starring Eleanor, a 1971 Mustang Sportsroof. The car actually received top billing in the film. It's the only Mustang to receive a starring credit, although there were actually several different cars used as Eleanor. In 2000, Nicolas Cage starred in a remake of the film, and Eleanor once again made an appearance.

These are just a few examples of how the Mustang has become so popular that it's inspired musicians and starred in a movie. There are also many different Mustang fan clubs around the world that continue to collect, discuss, and love this car. If you are a proud mustang owner in need of Classic Mustang Insurance, allow us to give you a fast free quote.